I have just been privileged to spend a few days with some of the greatest innovators and inspirational characters of our time at Necker Island for Virgin Unite’s and Igniting Change’s leadership gathering at Necker Island. This year we explored ‘Freedom’ in terms of the many forms it takes and how it has evolved in our increasingly connected world.

1 - The group in the Temple building on Necker Island

Most of the group met at Tortola, the British Virgin Isles most populous island, where we looked at school projects funded by Virgin Unite and Igniting Change and discussed the challenges within the education system right across the British Virgin Isles. We then took the short boat ride over to Necker to settle in after mostly very long journeys from all parts of the world and get welcomed by Richard Branson and the Virgin team over a refreshing cocktail and dinner at the great house on Necker. 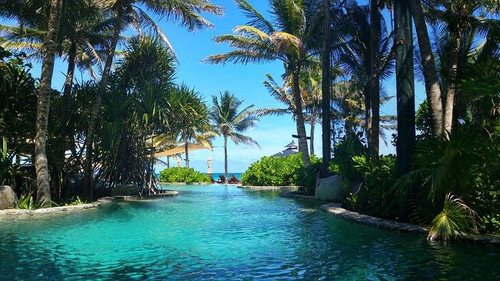 After a warm welcome from our hosts Virgin Unite hosts Sir Richard Branson and Jean Oelwang, Jane Tewson of Igniting Change talked of the overarching theme ‘Freedom’ and introduced her assistant Jade van Summeren who recounted her tale of addiction to Ice and her journey to become free from the problem and the importance of supportive people around you. Jade now makes a massive contribution to Igniting Change. 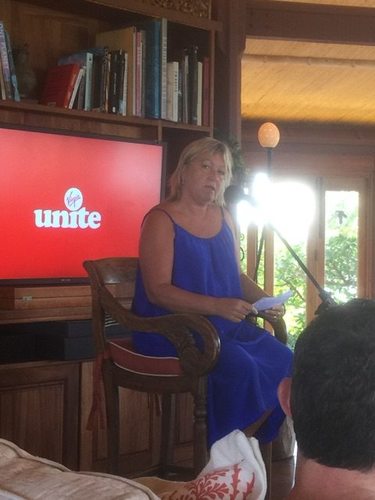 We then heard the remarkable tale of Ray Hinton who spent 30 years on death row in Alabama for a crime he never committed. Ray gave an inspiring account of dealing with prejudice, resilience, and his emotional management of those responsible for this gross injustice. His lifelong friend Lester Bailey who spent all those years’ faithfully travelling endless miles to visit him was also in attendance. 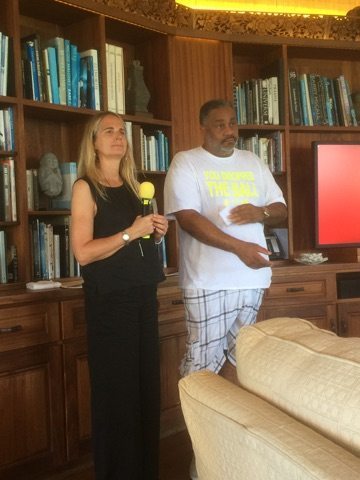 This was followed by a presentation from President Ernesto Zedillo of Mexico (1994-2000) who is the newest addition to The Elders as well as the Director of the Yale Centre for the Study of Globalisation and Professor of International Economics and Politics at Yale University. He provided great insight on the economic discrepancies occurring within developed nations which will only be compounded by current political trends. He also spoke of the great success his government had implementing enforced education amongst the poorer classes. 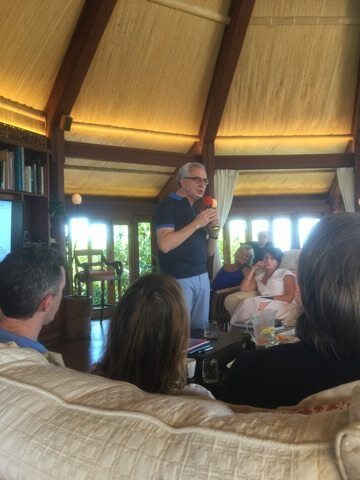 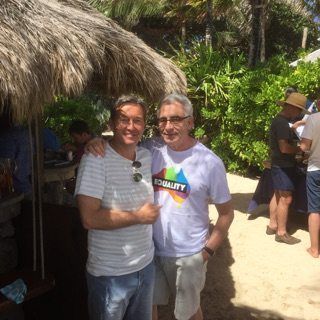 The day wrapped up with an illuminating Q & A with Sir Richard who spoke candidly on a number of topics including his concerns around both the US and UK political trajectories, the importance of his family support structure and the joy of grandchildren, an update on Virgin Galactic, and a recollection of his death defying balloon adventures. 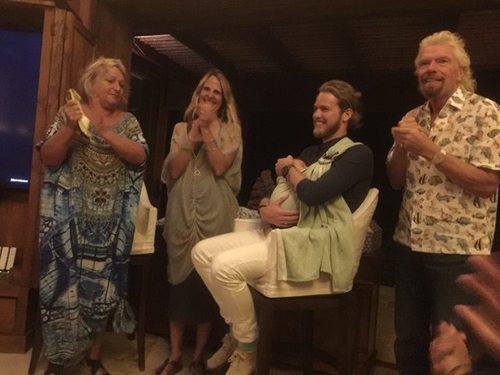 After an early morning race across the water to neighbouring Moskito Island Day 3 kicked off with a group discussion about ‘Freedom through Knowledge’.

This was followed by Angela Ahrendts, Senior Vice President of Retail at Apple and until recently CEO of Burberry. Since joining Apple in 2014, Angela has integrated Apple’s physical and digital retail businesses to create a seamless customer experience for over a billion visitors per year with the goal of educating, inspiring entrepreneurs and entertaining communities. Delighted to be catching up with Angela at South by Southwest (SXSW) later this month to check out her son’s band. 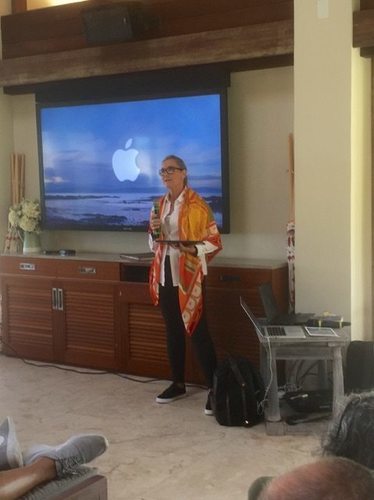 Next we heard the spell binding story of Auret van Heerden who served as President of the National Union of South African students during apartheid which led to long periods of solitary confinement and brutal torture as he refused to confess to his associations with the African National Congress (ANC). His mental fortitude and compassion to his torturers eventually forced them to breakdown themselves when they realised that he couldn’t be broken. Auret is now doing some great work in exposing illegal and morally corrupt supply chains around the world. 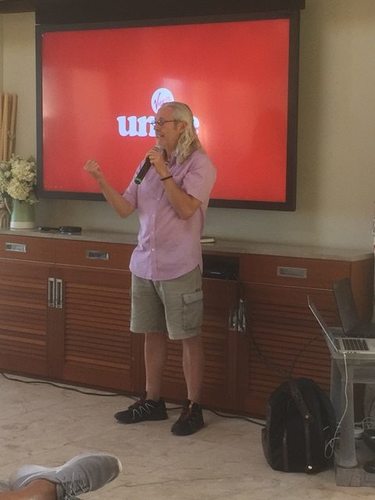 Day 4 began with a brainstorming session hosted by Jean Oelwang and President Zedillo around acknowledging the 10 year anniversary of the Elders and how this unique group of people might tackle the years ahead. Then back over to the Temple for a panel discussion chaired by AKQA founder Ajaz Ahmed on the ‘Future of Freedom’ where we heard again from Angela Ahrendts, and Audet van Heerden with some healthy discussion around the political landscape and the role of social media in society. 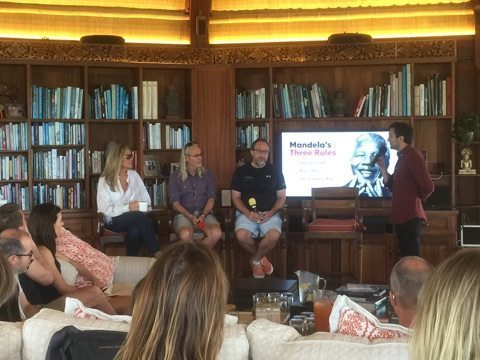 A short break and then Tom Snow on behalf of the marriage equality campaign which he co-chairs provided an emotional account of his own story and then gave an impassioned plea for the Australian government to do the right thing and accept marriage equality. President Zedillo on behalf of the Elders and Richard to the delight of all said they would take this up with Malcolm Turnbull. 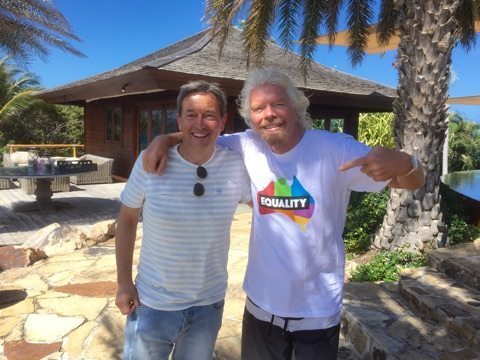 From there we moved to ‘Freedom through Exploration’ and a presentation by Professor Bertrand Piccard and engineer extraordinaire Andre Borschberg. Bertrand was the first person to travel around the world in a single balloon flight and then more recently teamed up with Andre to make the first solar powered flight around the world.

Bertrand spoke of adventure being about a journey of the human spirit and used the ballooning analogy of ‘losing ballast’ to change direction i.e. we must sometimes lose certain beliefs and positions to improve. 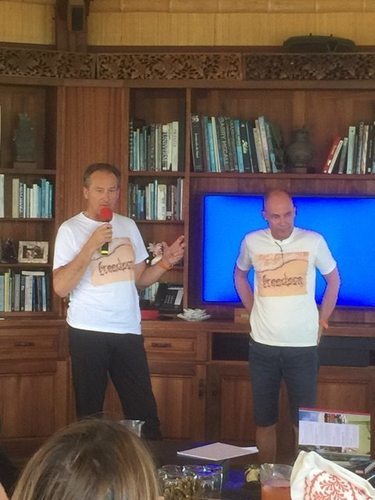 The final evening was rounded off with a presentation from Sam Branson on some of his recent documentaries made through his production company SunDog. Jane Tewson held a Q & A session with Sam which highlighted an impressive and rapidly maturing and compassionate man.

And as all good innovators know how to do everyone celebrated together on the last night.

Many thanks to Jane Tewson, Jean Oelwang, and the team at Virgin Unite and Igniting Change for a wonderful few days. Freedom must never be taken for granted!

Thank you also to the Branson Family for their warm and welcoming hospitality. Necker is truly a magical place. 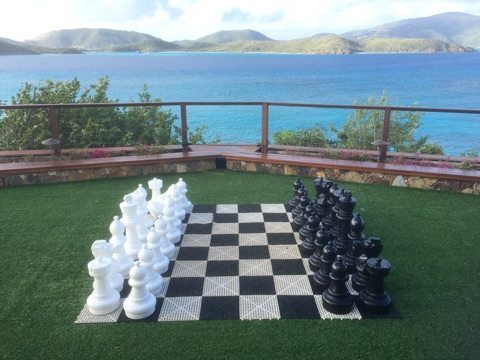 13 - Giant Chess Board at the Main House on Necker